Planewave Telescopes on the iTelescope Network

The 0.7 meter Corrected Dall-Kirkham Astrograph by Planewave and will be the largest system we offer in the Southern Hemisphere, as well as the largest system on the iTelescope network.  The Planewave CDK 700 is a masterpiece of engineering, containing not only the largest mirror on the iTelescope Network, but also Dual Nasmyth Focus, giving it the ability for the system to operate two separate imaging tools on either arm of the Alt/Az Fork Mount.

This system will be outfitted with the FLI PL09000 CCD and a compliment of 12 Astrodon imaging filters with LRGB, 3nm Ha, SII and OIII, and photometric UVBRI. 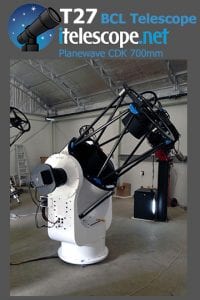 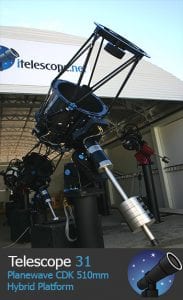 iTelescopes also has many other Planewave CDK telescopes on their remote network including a CDK17 & 20 in New Mexico, a CDK24 at SRO in California and a CDK12.5 in Spain.