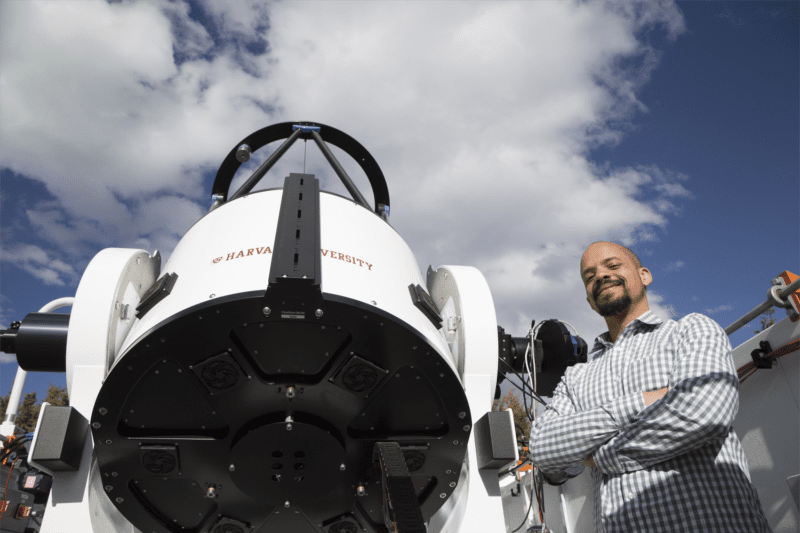 A groundbreaking astronomy project is searching the heavens for Earth-like exoplanets, which spacefarers of the distant future may one day visit or colonize. The study, called MINERVA, for MINiature Exoplanet Radial Velocity Array, now in its second year, is based at the Fred Lawrence Whipple Observatory in Mt. Hopkins, Arizona.

“This array is dedicated to finding Earth-like planets,” says University of Pennsylvania scientist David Sliski, who oversees the implementation of the MINERVA RED telescope, “in orbit around stars like our sun.” At the center of this undertaking are four PlaneWave CDK 700, 0.7m telescopes housed within 2 custom telescope enclosures.

This small-telescope array is both economical and innovative, Project Manager Jason Eastman of Harvard notes. “This kind of investigation is five to ten times cheaper to do with small telescopes,” he observes. Perseverance is key, Eastman adds, because “we have to look at stars for a long time, to get the observations we want.”

Of great interest are “rocky, larger-than-Earth planets around ‘quiet’ stars,” says Eastman, “in other words, stars that aren’t very spotty, like our own sun.” By assessing the visible “red shift” (a star or other light source moving away from an observer) or “blue shift” (moving towards an observer) of a star, “we can measure the planet’s size. The bigger the shift, the more massive the planet,” Eastman says. Using MINERVA, the astronomy team, headed by Harvard’s John Johnson, the principal investigator, recently focused on the 50-80 brightest stars in the cosmos. “MINERVA is one of the very few observatories doing this kind of investigation,” Sliski reflects, “and we use such instruments as cyber spectrographs to detect doppler shifts generated by the pull of these stars”.

Rocky, Earth-like exoplanets, so named because they are found in star systems other than our own, are possible candidates for a future human settlement, provided they lie within a given star’s habitable zone, and have a suitable breathing atmosphere, and running water. Systems like the recently-discovered TRAPPIST-1 in the Aquarius constellation, are typical of those MINERVA is trying to discover. “This is the focus of MINERVA,” Sliski states.

“We hope to discover about 14 new planets in the next few years,” Eastman says.

“We’re just at the beginning.” A galaxy of brilliant minds are working diligently on MINERVA, including students, professors, post-doctoral scientists, and research associates from CalTech, Harvard, Penn State, UPenn, University of Montana, University of New South Wales, and the University of Missouri.

PlaneWave Instruments stands proudly alongside these intrepid astronomers, as part of its long-term, ongoing commitment to education and discovery. MINERVA points the way to uncharted worlds, some of which we may yet call our second home.[vc_column width=”1/3″]