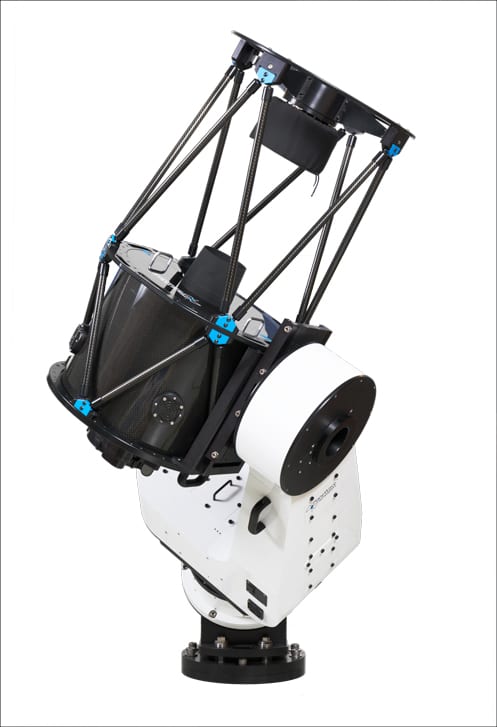 Yes, ladies and gentlemen—it’s that time of year again. It’s “rollout” time! PlaneWave’s newest offering—the L-350 Mount—is finally here. Production ran a little longer than expected, but then again it’s a high technology mount at a fairly appreciable price. We wanted to make sure they were “all systems go” before a single unit shipped

Realistically, the L-350 is very much an astrophotography mount. It can also be used for visual observing by astronomers, as well, and it has a variety of applications for commerce—commercial entities—be it civilian or defense oriented, you’ll have the ability to use these mounts with both our optical systems, and independently from them as Gimbals, which technically is what they are, but that’s a term that’s not commonly used in the astronomy market.

The shaping of L-350 is unique. The L Mount design is physically formatted in a fashion that’s not common amongst higher performance products in the existing market. A great thing about the L-350 is that you can mount a variety of different optical tubes without needing to swap out counterweights. Additionally, we offer an external mounting surface on the other side of the altitude/declination hub that’ll allow a second telescope or instrument packet to be mounted.

“When it really comes down to it, all of the drive and control technology featured in the L Series, including the L-350, was originally born in the CDK700, which was the first observatory class mount that PlaneWave produced roughly seven or eight years ago. Following the CDK700’s acceptance and success in the market, we decided to design and manufacture the one-meter telescope, the CDK1000. Following the creation, design, and finalization of that product, we went about adapting all of the engineering that we’d developed into all of the manufacturing processes we’d learned with the first two observatory class systems, into the stand-alone L Series Mount body that started off with the L-500 and the L-600. As the design and engineering was completed, we decided it would be a very worthwhile idea to make a smaller version at a lower cost that’d be more acceptable to the traditional astronomical market. The L-350 has a very broad set of applications,” said Eric Blackhurst, Director of Technical Sales.

“We decided it would be a very worthwhile idea to make a smaller version at a lower cost that’d be more acceptable to the traditional astronomical market. The L-350 has a very broad set of applications,” said Eric Blackhurst, Director of Technical Sales.

One important feature about the L-350 is the direct drive systems. These are basically giant brushless DC motors—just like you’d find in a drill or high-end washing machine, or more specifically, an industrial-grade CNC machine. “You gain the benefits of not using gears, which means that you don’t have backlash (or mechanical slop) in a gear system and you don’t have periodic error. Periodic error results from the fact that humans are imperfect, any machine we make is imperfect, and any gear we cut on one of those machines is imperfect,” explained Blackhurst.“There’s always going to be some degree of mechanical error in a gear surface, and because that gear will have period—how long it takes for the gear to make a full revolution. Every time we get back to a spot where we’ve done mechanical deviation, tracking will either speed up or slow down because of the difference in what’s effectively the diameter of the gear at that point in its travel. So by eliminating gears in the mount and using direct drive systems, we’ve eliminated those two problems entirely, resulting in a tracking system that’s able to both point and track more accurately. It’s far faster in response to directional commands by software.”

Additionally, the L-350 uses on axis encoders. This is a necessity of direct drive design in comparison to more traditional systems. “A normal servo driven system would have the encoder, which is effectively the electronic device watching the motion axis at the motor.

That leads to hysteresis. In our systems, the encoder is on the rotational axis. Again, this means more accurate pointing, tracking, and more accurate tracking corrections. This is why traditional amateur astronomers, commercial, defense, and aerospace worlds are looking at the L-350 very seriously,” said Blackhurst.

Another really cool thing about the L-Series is that it’s being featured by Nissan Motors UK in a series of public relations elements, and their social media campaign, as well as a select number of prestigious car shows in Europe.