The Nissan Motor Company, builders of the new Navara Dark Sky concept truck, has chosen Planewave as the telescope to be used in the groundbreaking Gaia program, in conjunction with the European Space Agency (ESA). The vehicle, a pick-up-and-trailer combination, carries the Planewave telescope to remote areas far from the light pollution of major cities, to perform detailed observations of the sky. This unique collaboration between the automaker and the ESA highlights the critical role of precision astronomical instruments such as those offered by Planewave, in advancing our understanding of the heavens.   “In order to perform the Gaia mission,” says ESA’s Fred Jansen in Nissan’s promotional video, “we need to go to very remote places.”

The truck-and-telescope platform gives astronomers the mobility to accomplish that. Planewave sent Technical Sales Director Eric Blackhurst to Wales to assist Nissan with the handling of the sophisticated telescope. “The Nissan people were excited about the telescope’s appealing image,” Blackhurst notes, “and I was happy to guide them in its care and transportation. Blackhurst worked extensively with the Nissan team, playing an integral role in making the campaign successful. “There’s more to come, too,” Blackhurst hints. With a Planewave representative on the scene, Nissan embarked on a fascinating journey underneath the English sky, “and we were amazed to get two clear nights in a row,” for the photo shoot, Blackhurst recalled.

The full Gaia project, which has been underway since its solar-orbiting probe left Earth in 2013, seeks to create a three-dimensional map of the galaxy, from its vantage point a million miles from our planet. The Navara Dark Sky system, which features a special, refrigerated housing for the telescope while in transit to maintain optimal observing temperatures, complements the probe by utilizing the 16-inch Planewave telescope to supplement the information generated by the spacecraft. “Telescopes like the one in the trailer are needed in studies of planets and stars in our galaxy,” Jansen notes, “allowing Earth-based follow-up campaigns enabled by the Gaia data.” 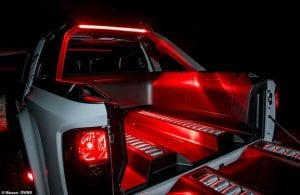 The truck and its telescope were recently unveiled for the public at the Hannover Auto Show in Germany, to much critical acclaim. The Dark Sky system is essentially a rolling observatory, complete with a mobile Wi-fi link, powerful laptop, and special materials throughout both vehicles to maximize the effectiveness of the platform. “This is a production truck, with specialized equipment,” Blackhurst says, “and it can take the Planewave telescope to new places.” The Planewave telescope can search deeply into the night sky, looking out beyond Saturn’s rings to chart distant nebulae, supernovas, and stars with planets of their own. Ashwani Gupta, Nissan’s senior VP for light commercial vehicles, says the company is proud to be a participant in the scientific investigation of space. “The Nissan Navara Dark Sky Concept is a brilliant example of Nissan serving as an authentic partner,” Gupta reflects, “empowering our customers to go anywhere.” The telescope is to be donated later to ESA as part of the company’s educational initiative, Blackhurst says, opening a new vista for astronomy students and astronomers in Europe.