A New Perspective on Orbital Debris

The US DoD is testing a new S-band radar space fence at Kwajalein. It should find and track most new objects during their first pass, rather than needing days to months using hit-or-miss “pencil-beam” radars. This fence may find many objects down to 2-5 cm that were not found before. This may catalog ~20X more debris in low earth orbit (LEO) than at present. But this raises a more basic question:

1. What Is “Good Enough” Debris Detection?

The major mission-ending risks for most operational spacecraft, however, come from impacts with debris just above the threshold of the protection shields
(~5-mm to 1-cm).1

For each of ~10,000 >10cm LEO fragments now tracked, there may be ~100 pieces of “cm-class shrapnel” (an intentionally loose description) that have enough mass and impact energy to disable most spacecraft, often without leaving clear evidence of impact. Nearly all direct LEO debris costs will come from cm-class shrapnel, not larger objects of military interest.

One can armor satellites against larger impacts, but it raises costs. Even if most shielding protects up to ~1 cm, then most satellite impact losses will be from 1-2 cm shrapnel that is below the detection threshold of DoD’s new $1B fence. This raises a new practical question:

2. Can We Track and Avoid Most Lethal Debris in LEO?

LEO includes average orbit altitudes of 200-2000 km. But there are few maneuverable satellites below ISS at ~400 km, and few above Globalstar at 1414 km. Tracked debris counts are highest near 780 km and 850 km altitudes, due to the Cosmos/Iridium and Fengyun/Asat collisions at those altitudes. Counts are a factor of ~10 lower at both 400 and 1200 km.

Radar sensitivity scales with the -4th power of range, and -6th power of small-target diameter, while telescopes seeing sunlit targets have a -2nd power sensitivity for both range and diameter. The S-band fence may be useful for ISS, but telescopes will beat radar at higher altitudes.

Telescopes that see most 1cm debris at Globalstar altitude will also see smaller debris at lower altitude. Even an incomplete “cm-class LEO catalog” may include ~1 million items, 100X more than the LEO debris count in the existing space-track catalog.

A 100X larger catalog poses many challenges. But if we can avoid more lethal debris impacts to operating satellites, more satellite failures can be avoided. Unfortunately, current conjunction warnings involve large uncertainties and low chance of impact. Consider a satellite with 1m2 average vulnerable body cross-section. A conjunction warning may estimate 20m miss distance, but with RMS uncertainty of 50m vertically and 500m horizontally. The chance of collision is then only ~8 ppm (parts per million).

What Is an “Actionable” Conjunction Warning?

Conjunction warnings are “actionable” if and only if it is cheaper on the average for a satellite operator to act on them than to ignore them. Acting on them requires using propellant, or changing attitude to change drag and/or reduce vulnerability. This can affect satellite function or life. The total cost per avoidance including analysis and possible loss of some normal use may be 10-100 ppm of the cost of losing use of the satellite due to impact. Buying a commercial warning service adds to the cost. To be actionable, warnings must have small enough errors that the chance of lethal impact exceeds the cost ratio of acting on a warning vs losing the satellite.

Ground-based telescope fixes of LEO objects may be within a few meters, but uncertainties in predicted future orbit positions quickly grow much larger, particularly for cm-class debris, which has a larger area/mass ratio than satellites and hence responds more to air drag. So one must either observe debris much more frequently than satellites, or get far better in predicting drag, including changes in debris drag area as spin axis, orbit plane, and perigee phase slowly evolve. 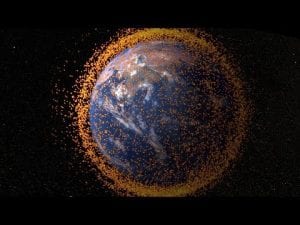 Typical debris may require >100 updates/year, including both routine and “priority” updates before worrisome conjunctions. A suitable network may need ~2 telescopes at each of 50 good sites, with each telescope slewing to and tracking new objects every few seconds after dusk and before dawn. This would quickly wear out geared mounts, so agile direct-drive mounts seem necessary. During the middle of each clear night, when few LEO objects can be seen, telescopes can look for debris near GEO, or possibly to provide laser-comm satellite downlinks.

Table 1 lists parameters for a possible “threshold brightness” 5mm object at Iridium altitude, using a PlaneWave CDK500 telescope. At other altitudes, the threshold diameter roughly scales with altitude, so most 1cm objects might be visible at up to twice Iridium altitude.

Table 1. Typical Conditions for Orbit Updates of a Threshold-Brightness Object

The value of a conjunction warning service should scale with the number of lethal objects in its catalog. It appears feasible to detect, track, catalog, and actively avoid not just the largest ~1% of lethal debris fragments in LEO as we do now, but perhaps most of them. But we do not yet know how much lethal shrapnel there is, how bright it is, how often it must be tracked to allow actionable conjunction warnings, how many sites and telescopes will be needed, how much such a telescope service or conjunction computation service will cost, or how much LEO satellite operators will pay for it. We also do not know the markets for other services a suitable telescope network could provide, including also detecting and tracking debris in GEO, and supporting large-scale space-to-ground laser comm. We hope to address these issues as resources allow.

To learn more about this concept, including possible strategies for initial detection, first-pass orbit determination, and better drag prediction, please download our 11-page white paper, “A Telescope Network for Avoidance of Most Lethal LEO Debris.”

For a broader overview of orbital debris issues, please see pages 1-10 of this “Orbital Debris 101” paper.