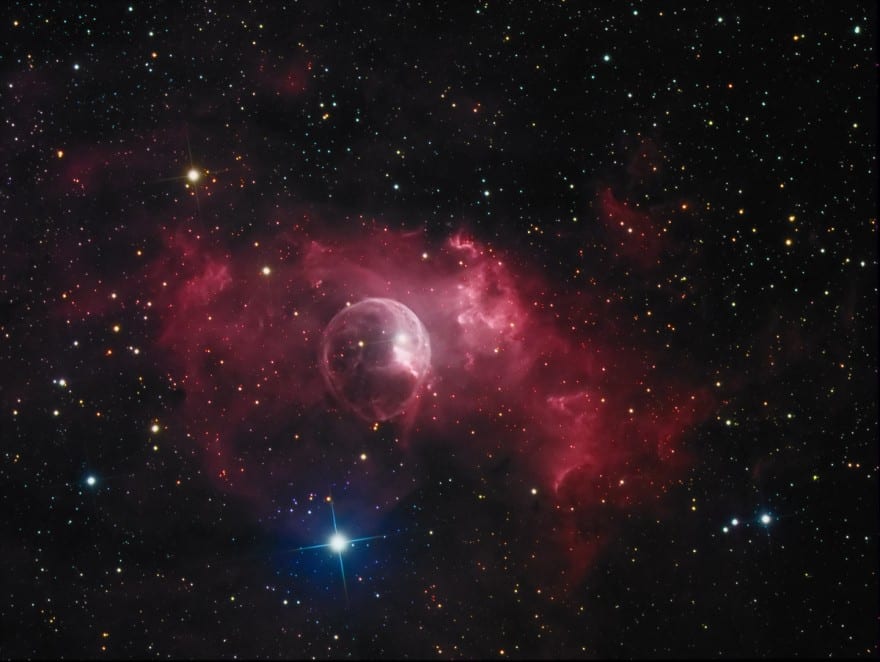 Looking like a celestial Christmas tree ornament, this is the beautiful “Bubble Nebula”, known officially as NGC7635. Is is formed by gas being compressed by a strong stellar wind from massive star BD+602522, forty times as massive as our sun and several hundred thousand times more luminous. As fast moving gas escapes the star, it compresses surrounding sparse gas into a shell. The shell, consisting of hydrogen, oxygen and sulfur, is ionized by the radiation from BD+602522 causing it to glow. The bubble is approximately 6 light-years in diameter.

BD+602522 is a “Wolf-Rayet” star, a star in the end stages of its life which emits fierce stellar winds (charged particles streaming from its surface) rapidly depleting its mass until it finally dies in a supernova. Wolf-Rayet stars (named for their discoverers) have surface temperatures between 30,000 and 60,000 degrees Kelvin and emit stellar winds with speeds exceeding 1500 kilometers per second. There are only about 300 Wolf-Rayet stars known in our galaxy.