The Student Space Telescope Network At the forefront of CubeSat technology

Officially launching last June, the Student Space Telescope Network (or SSTN) is the brainchild of Ralph Emerson, PlaneWave Instruments’ Vice President of Sales & Marketing; Russell Genet, research scholar and resident at California Polytechnic State University; and PlaneWave Instruments advisor and co-founder of the fiber optic communication company Sierra Monolithics, David Rowe. Basically, PlaneWave partnered up with Cal Poly to develop the SSTN with its main purpose being to provide students with much-needed access to space telescopes via CubeSats that are primarily used for space situational awareness and astronomical research.

CubeSats are a class of nanosatellites that use a standard size and form factor. The standard CubeSat size uses a “one unit” or “1U”” (measuring 10x10x10 centimeters), and is extendable to larger sizes; 1.5, 2, 3, 6, and even 12U. They provide a perfect platform for education and space exploration, and more importantly, they offer a cost effective platform for science investigations, new technology demonstrations, and advanced mission concepts using constellations.

“Cal Poly was involved in the original development of CubeSats back in 1999. They first started out as small satellites—ten centimeters on a side and just four inches in length—in the shape of a cube. They had various sensors and so forth, and they’d ride along on other spacecraft’s payloads. Once the CubeSats entered low Earth orbit (LEO), they’d turn these little CubeSats loose. They had springs on them, so when the payload doors opened—out popped the CubeSats,” explained Genet. 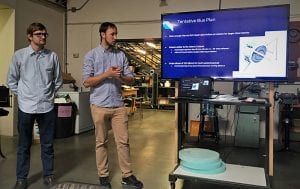 “There’s a few CubeSats telescopes already in orbit, and there’s now a lot of colleges already interested in the SSTN,” stated Genet. “We’re going to have a CubeSat Astronomy workshop this coming April immediately following the CubeSat Developers workshop. Our plan is to bring everyone in the astronomical community together.”

“As it stands right now, the SSTN is intended to be a system of at least one—potentially more as we expand outwards—telescope for the end use purpose of facilitating undergraduate research and astronomy by making use more cost effective space-based assets that you could theoretically obtain from a larger scale NASA mission,” explained Johnson.

“It’s ultimately intended to be an undergraduate-focused research system by which graduate students will be able to submit proposals for observations of targets by making use of technology that can only be utilized outside of the Earth’s atmosphere, thus expanding the potential applications for undergraduate research access beyond traditional and ground-based observatory systems,” said Johnson.

“We’ve also been in regular contact with industry professionals, so we can get input on what’s currently state-of-the-art—in terms of technologies—that we can leverage for realizing this system’s concepts. And also making use of our own knowledge of faculty in the aerospace department who usually have several years worth of industry experience is also a great help.”

“Somewhere, something incredible is waiting to be known”―Carl Sagan

CubeSats were originally conceptualized as an idea for a partnership between a professor at Cal Poly and a professor at Stanford University to more democratize access to space by standardizing small satellites for smaller payloads that universities, non-government entities, or even defense contractors could afford. Johnson and Van Steenwyk are heading up the SSTN at Cal Poly as their CubeSat program’s lead student engineers/analysts.

“As of right now, there’s only us two working on it. However, in the next week or two, we’ll be pitching the idea to the PolySat program on campus, which will up the involvement in the SSTN to around 50 students. Once that happens, we can start continuing to develop the program. We’ll get a much more broad involvement because we’re going to reach out to other majors outside of the engineering field as well,” stated Van Steenwyk.

“The CubeSat we’ve envisioned is called a 12U. Even though it seems really large from the name, we’re talking about an eight-inch telescope that’s going to be mounted on it, so it’s not really a stretch of the imagination by any means. It’s actually kind of neat because one of the main perks of the CubeSat program is that you don’t have to book your own launch, and more importantly, you don’t have to pay for the entire rocket that’s going to go up, land back on Earth, or be destroyed. You kind of ‘hitch a ride’ with other rockets’ payloads, and that lowers the cost drastically,” explained Van Steenwyk.

Right now, it should be noted that laser communications has been in recent development as a technology demonstrator by NASA that drastically improves the performance of CubeSats (or any space venture, really) because with traditional radio, amateur frequencies, or even experimental bands, you can get pretty decent data rates for most things. But when you start looking at the data volume of a mission for NASA, you have to be able to downlink thousands of images, and laser communications is really the only way to be able to downlink full frame images without sacrificing any part of the image or having to worry about the image’s compression. “That’s been another big focus of the SSTN, because I know PlaneWave has been working with a few other groups to bring laser communication into fruition, and we’re really excited about that idea—it’ll revolutionize our communication systems,” said Van Steenwyk.

“Another plus about working on this project is that you get to learn about every single system, and that’s not something you usually get to see. Cal Poly is really good about the ‘hands on’ aspect, and so both Alex and I had to sit down and figure out how to handle power problems, how to handle communications problems, how to make the images resolve on our payload, how to make the thermal constraints work—basically, how to keep it all in the same bus,” explained Van Steenwyk. “We really are in the right place at the right time because technology has converged enough—and interest has converged enough—to where people like us can actually conceptualize and potentially make a system that’ll be used by people around the globe. And that is amazing.”