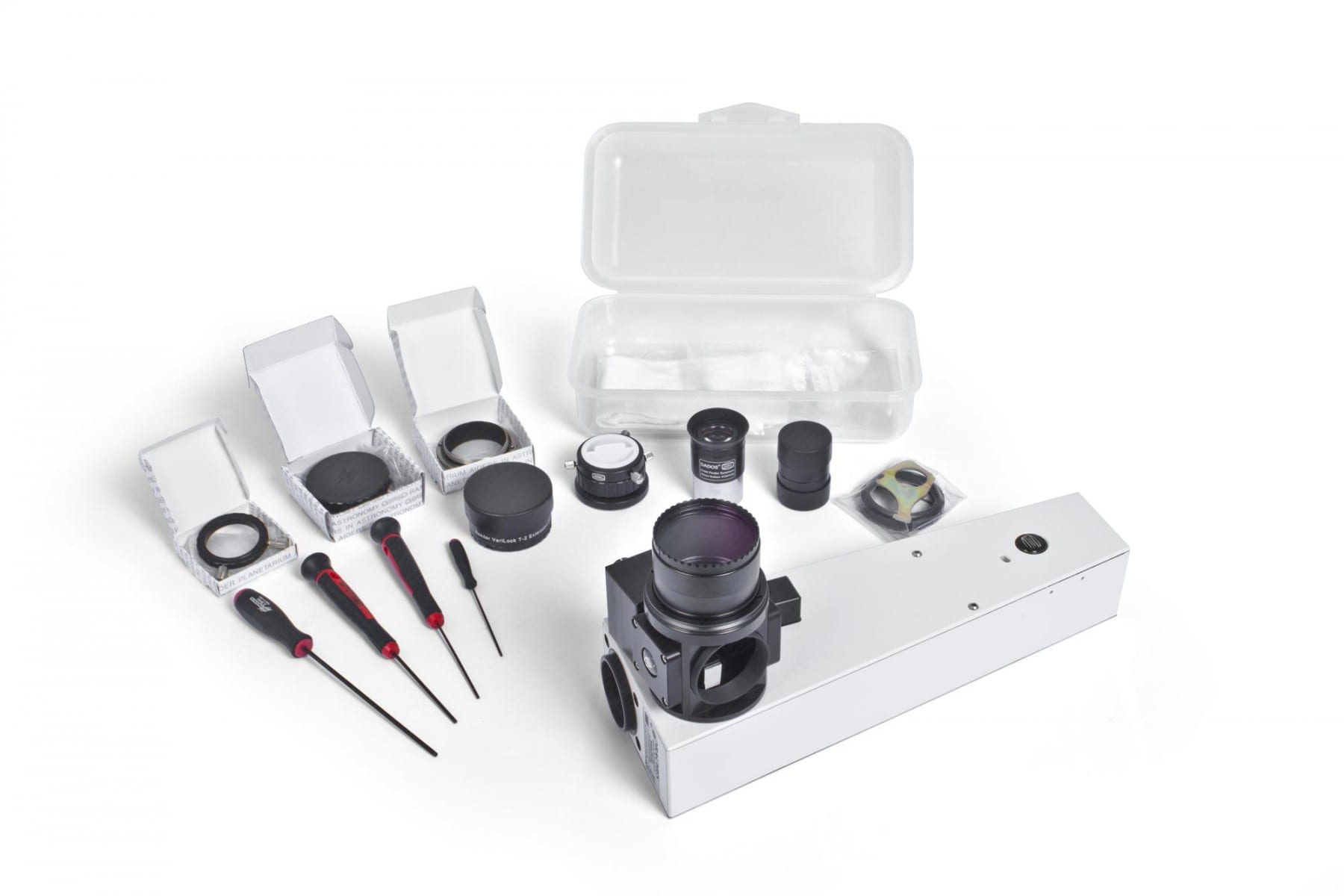 The BACHES Echelle-Spectrograph, shown here with the recommended, optinally available Remote Calibration Unit RCU (on the left, with an SBIG ST 1603 ME camera attached), is a professional spectrograph for precise, high-resolution analysis of spectra. BACHES is an acronym for Basic Echelle Spektrograph.

The BACHES Echelle-Spectrograph, shown here with the recommended, optinally available Remote Calibration Unit RCU (on the left, with an SBIG ST 1603 ME camera attached), is a professional spectrograph for precise, high-resolution analysis of spectra. BACHES is an acronym for Basic Echelle Spektrograph.

How does an Echelle Spectrograph work?

The french word “Echelle” means stairs or ladder. If you take a look at an Echelle-grating at very high magnifications, you can easily see why: The Echelle is a reflection grating, the light is reflected at each of its grooves. As the width of each groove is comparable to the wavelength of light, optical diffraction occurs. Each groove is like a slit, which directs the diffracted light into the way of the geometric reflection.

Thus, an Echelle-Spectrograph gives you a whole lot of high-resolution spectra of several orders, but they overlap. Of course, this overlapping is not desired.

With an additional dispersive element – be it a prism or a grating – the spectra can be stretched at a right angle to the Echelle grating so far that they do not overlap any longer. 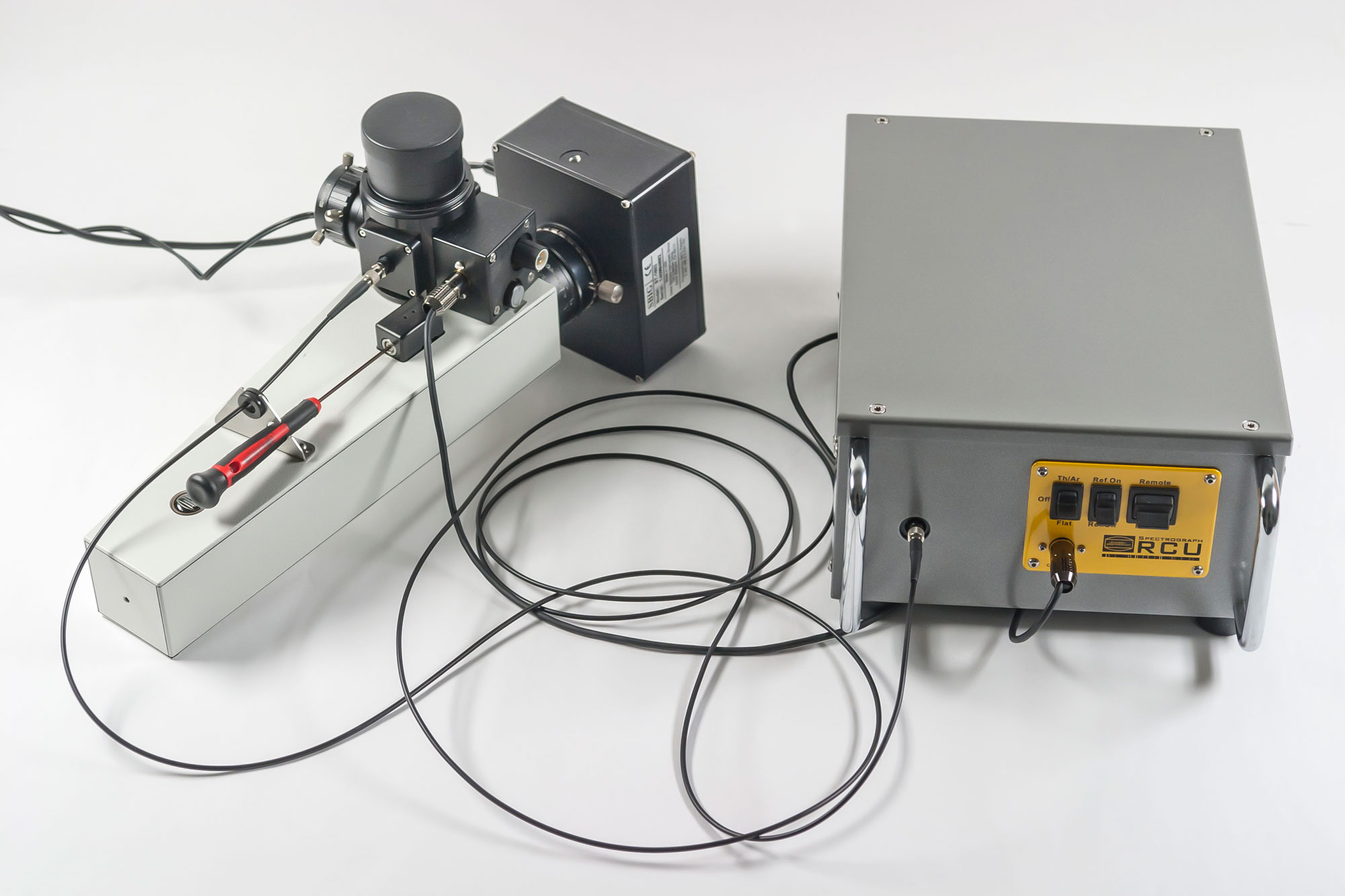 Echelle gratings are often used in astronomy for taking images of stellar spectras at high resolution, because this way a high-res spectrum covering a very large wavelength-range can be photographed in one single image. In contrast to this, high-res gratings are optimzed for a rather small part of the spectrum; you’d also need very long CCD-sensors (or a line of several sensors) to take an image of the complete first or second order spectrum at once. With an Echelle spectrograph, you can take at once an image of the complete spectrum with one not-too-large CCD-sensor.

So, the biggest advantage of a BACHES Echelle spectrograph over a common Blaze Grating with a comparable resolution is obviously that you can cover the complete spectrum at the highest-possible resolution in just one image. This way, all relevant parts of the spectrum are covered AT THE SAME TIME. Also, common high-res gratings are optimzed only for a part of the spectrum. Taking an Echelle-spectrum is not more complicated than a guided deep-sky-image. 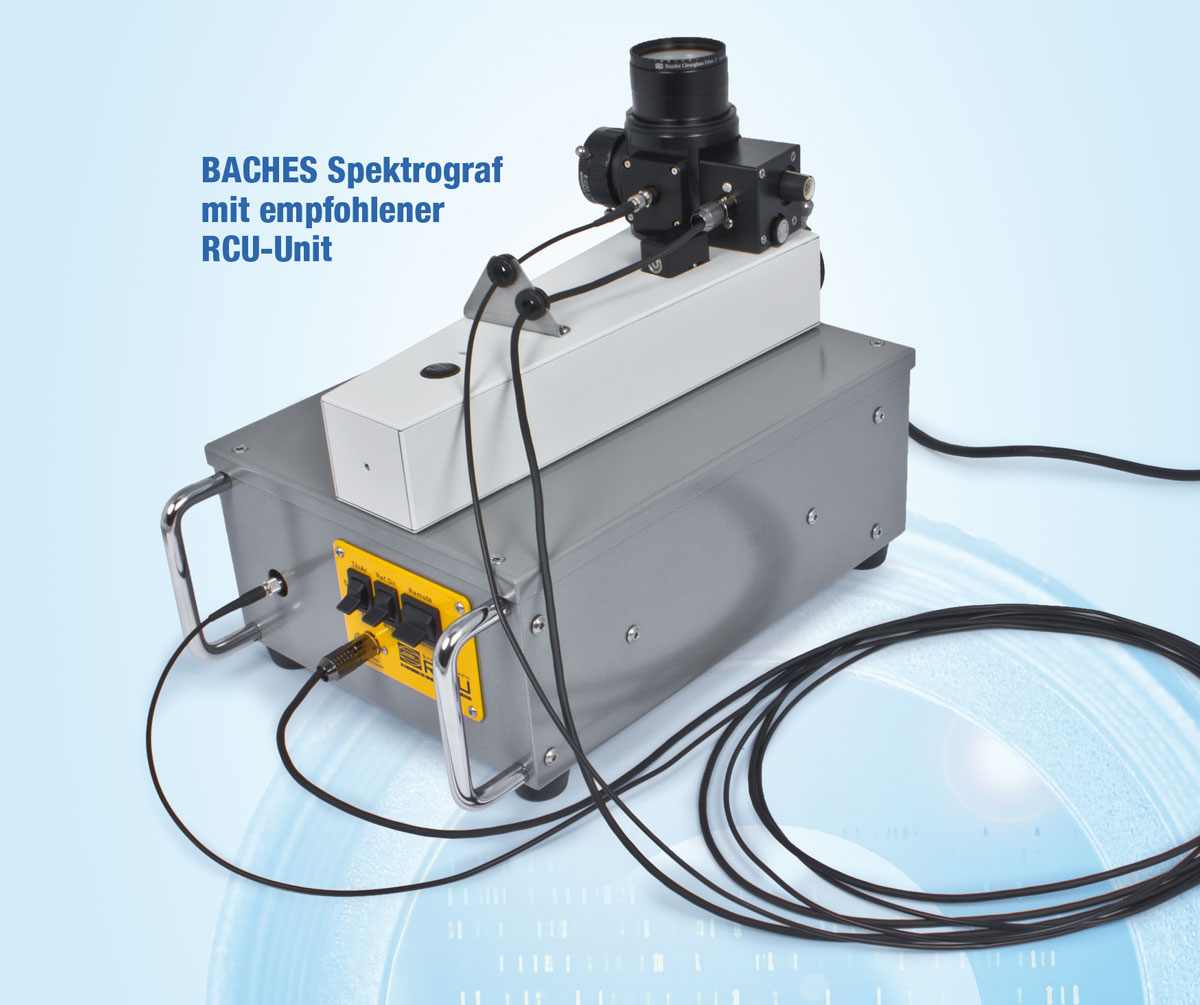 You might say that you know in advance which part of the spectrum of a star you want to analyze. But there are two problems if you take one spectrum after the other: At first, you lose time, and second, you don’t collect the data at the same time, which can a problem at fast-changing objects. Just think of a fast event, which appears differently in different colours – like the rapidly expanding atmosphere of a star, e.g. during a nova. An Echelle can show you the emission lines of many elements at the same time.

Of course you can’t predict a bright nova like that in Delphinus in 2013. But there are many other stars which profit from a BACHES Echelle. Prominent examples are the Be-star Zeta Tauri and the symbiotic double star Beta Lyrae (take a look at the results below).

But there are also some purely practical reasons why you should consider a BACHES Echelle:

It is much easier to obtain a complete spectrum with a BACHES Echelle than with a normal spectrograph based on gratings. You can also overlay a ThAr-reference-spectrum and a flatfield-spectrum via fibre optics.

The Magnesium-Triplett in the BACHES Echelle solar spectrum

To demonstrate the high resolution of the BACHES Echelle-spectrograph, you can find here an image of the solar spectrum. For this, the BACHES was not pointed directly at the sun (be careful!). Instead, you can simply point it at the sky, even if it is cloudy. The daylight is sunlight which is scattered at the clouds, so you can find there all the spectral lines which are also visible when you point your telescope directly at the sun.

The sun is a main sequence star with the spectral type G2, luminosity class V. In the lower red part of the spectrum, the H-alpha-line is prominent, above in the orange region is the Natrium-dublett. The group of spectral lines in the green part of the spectrum – the so-called Magnesium-triplett – is typical for a G2-star. At high magnification, it can be resolved into several lines. The more lines you can see, the better is the spectrograph. The labels show the wavelengths of not-excited atoms, which are known with a precision of at least 0.1Å. In this part of the spectrum, the ThAr-reference lamp also has many lines which are known with an extremely high precision. The ThAr-reference-spectrum was calibrated with VisualSpec software with high precision (+/- 0.0057Å), this calibration was applied to the solar spectrum (+/-0.0814Å). The dispersion is 0.133Å/pxl. The diagonal line in the left part of the image is an internal reflection which is typical for an Echelle-spectrograph and does not affect the spectrum.

Imaging cameras for the BACHES

To achieve a complete spectrum e.g. with the ESO-MIDAS-software, the camera sensor must be at least 9x13mm large. For a perfect sampling, the pixel size should be 9µ, that’s what the BACHES is designed for. A perfect choice is e.g. the KAF-1603ME, which was once used in the monochrome SBIG-camera ST-1603ME (pictured), or the current model STT-1603ME. Its quantum efficiency does not drop below 45% in the relevant part of the spectrum. You can find out more about our SBIG-cameras at www.sbig.de

If you have got only access to a CCD-camera with much smaller pixels than 9µ, you should try to get as close to 9µ as possible viabinning. The common KAF-8300 sensor e.g. has got 5,4 µ pixelsize. Here, it is a good idea to use 2×2-Binning with 10,8 µ pixelsize.

The sun is a good target for first observation. Simply point the BACHES without a telescope at the sky (not at sun!) and take a photo of the spectrum. The sunlight, which is scattered in our atmosphere, has got the same spectrum as that of the direct sunlight. The dark Fraunhofer lines are typical for our sun, a G2-star with the luminosity class V. The BACHES-daylight-spectrum in the image was taken with the 25 µ-slit. The exposure time with an SBIG ST-1603ME (9 µ) CCD-camera was 240 seconds, a dark-frame was subtracted. The spectrum is divided in 25 lines, covering the spectral range between ca. 392nm UV (top) and ca. 710nm IR (bottom). You can see all the lines between Ca II (393nm/397nm) and H-alpha (656nm) in high-resolution, which is important for spectral classification.

You can attach a DSLR-camera to the BACHES, if you want an Echelle-spectrum in colour. The additional colour information can be helpful to get familiar with the BACHES and to identify the spectral lines faster.

The coloured image to the right is that of a fluorescence lamp, which is usually filled with mercury vapour. The tiny emission lines of mercury are accompanied and overlapped by those of the rare earths which are inside of the coating inside of the lamp. 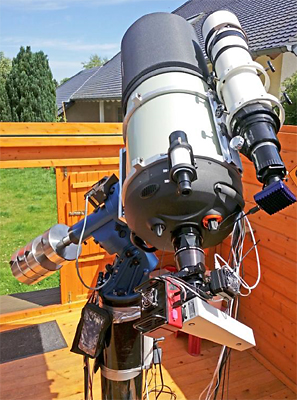 The aperture ratio of the telescope

For a high energy efficiency (transmission of the system), the BACHES Echelle is optimised for an f/10 optical system. There will be some loss of brightness at faster telescopes. You can find a calculation for this in the manual of the BACHES.

But don’t worry too much about this. If you don’t have an f/10-telescope, you can as well use one with f/7 successfully. All you need to do is take more single frame shots. There are many bright objects where this is profitable (see e.g. beta Lyrae). If you have a true apochromatic telescope or a perfect mirror telescope, you can use a 1.5x or 2x barlow lens, which itself must apochromatic, otherwise there would be less blue light available than red or green. A good choice is e.g. the 1,5x Barlow (# 140 5331/BARADV) from AstroPhysics, which replaces the 2″-nosepiece of the BACHES.

The standard scope of delivery of the BACHES Echelle

Of course, the spectra gained with a BACHES can be photographed and calibrated. The wavelength scale can be calibrated e.g. with the help of known spectral lines of the object. In many cases, this is enough to measure the relative position a spectral line. But if you want to measure the absolute shift on the wavelength scale because of the Doppler effect, you must take a reference image of a calibration lamp before and after the measurement, under the same conditions. The precision must be in the range of 0.001 … 0.01Å, if you want to use the full precision of the BACHES. That’s why a good calibration lamp is essential for serious work.

You can find further information about the Baader ThAr calibration lamp and the RCU-control-unit at the other products in our spectroscopy-category “Baches”.

The BACHES comes with a DVD which contains a Linux-based 32-Bit MIDAS virtual machine which can run e.g. on a Windows-PC.

MIDAS is a script-based command-line programming tool which can be used for the complete calibration of spectra.

A special feature of the included MIDAS-scripts is that a number of orders (which you can specify) is recognized automatically and can be calibrated to their wavelengths with the help of the RCU while being put together to one long spectrum. Carlos Guirao, one of the designers of the BACHES Echelle-spectrograph and programmer of the MIDAS-scripts, has also created an informative video-tutorial about calibrating the spectra.

For a first impression on how to calibrate a spectrum, please take a look at that video. You will also find an example for a complete calibration with ESO-MIDAS with a data-set which was made with a BACHES (solar spectrum, ThAr-reference spectrum, flatfield-spectrum) in the calibration-manual. The MIDAS-scripts for calibration are ASCII-files, so that you can change them according to your requirements.